Millennium Show Coach Featured on the Cover of FMCA Magazine 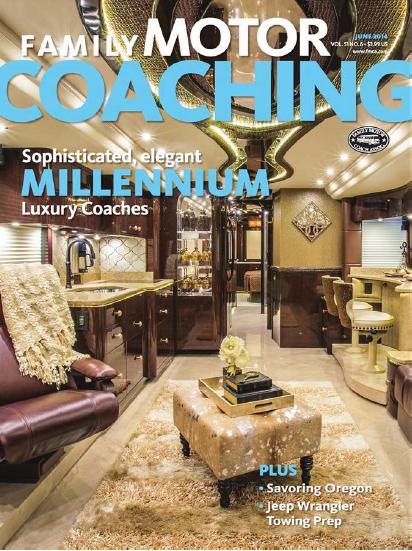 Millennium Show Coach has been featured on the June cover of Family Motor Coaching Magazine. The opulent coach and our flagship model, a 2015 Millennium Prevost H3-45 Quad-Slide, made its first public appearance at the 2014 Tampa SuperShow.

Family Motor Coaching magazine has been covering all the need to know motor coaching news for nearly 70 years. Initially a quarterly publication, FMCA Magazine attacked success and eventually become a monthly subscription. Every issue contains columns and articles written by technical experts and experts on the motorhome lifestyle. There are topics for everyone including travel destinations, motor home accessories, technical motor home aspects and even do-it-yourself project guides.

For the second time, we’ve proudly been featured on the cover of the popular industry publication, after originally gracing the November 2008 issue. The accompanying article, written by Christopher Dougherty, gives readers an exclusive look at the custom features innovated by the Millennium team.

The luxury RV is packed with the latest technology, including a Savant Systems Home Automation System that gives Millennium owners control over their entire coach at the push of a button, including capabilities never before seen in the industry.

Dougherty had the chance to speak to Millennium owners Nelson and Evelyn Figueroa, about their mission and the future of the company.

He writes, “Millennium Luxury Coaches is a company built on dreams and hard work, crafting custom coach conversions that are the dreams of those who have worked hard. It shows in every detail.”

Talk To Us About a Luxury Coach! 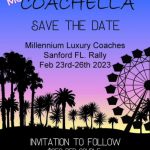 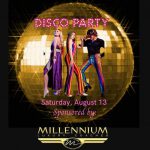 It’s time to dig out the platform shoes and bell bottoms!!  ... 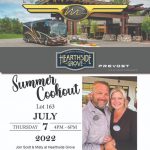 Richard Klaphake
22:44 07 Jul 22
Confusing going through a lot of distress

Christopher Cooley
15:43 30 Jun 22
The driver in there company transit van hit my vehicle in a parking lot and scuffed my bumper. When I try to get the... insurance to fix it they denied hitting the vehicle even tho I got clear pictures to prove it and they still acting like they did nothing. Shady company that won’t own up to own mistakes that’s what’s wrong with today times. Just want my vehicle back to what it was I take pride in my vehicle. Would never do business imagine how they treat your coach …read more

Jim Senske
13:40 22 Nov 21
Americas no. 1 converter-light years ahead of their competition

wayne thompson
13:42 05 Dec 20
It is not enough to give Scott Puch the normal accolades such as honest, loyal and customer committed; he delivered an... unusual amount of integrity for his profession and compassion for a problem that I had while purchasing a motor coach.Months after my purchase, Scott learned that I had broken promises from a co-worker. These conditions were in writing. Scott immediately offered his assistance to solve my problem and apologized for my inconveniences.Scott treats others in the manner in which he would like to be treated. He listened to me and immediately got involved and now I am completely satisfied.I highly recommend Scott and Millennium Coach.read more

James Steen
18:28 23 Oct 20
I was very pleased with the salesman presentation.

Mike Huck
12:08 16 Nov 19
I used to be a machinist .precision is critical in all measurements

John Heizman
12:50 23 Feb 18
Mam what craftsmanship on those motorcoaches. The people were very nice so we were very well received. Fun place to... play.read more

Wayne Butt
01:11 24 Jan 18
Wonderful staff! Tyler and David did a wonderful job taking care of us!

klatchman
23:25 14 Jan 18
They build high quality products. I visited during a teacher behind the scenes tour. The have the best master craftsmen... working for them.read more

Barbara Chapin
00:36 07 Dec 17
The people here at Millennium are very friendly, professional, eager to please, and top notch. They are bring high... quality into your experience with eagerness to please. The best people to work with. We love our coachread more
Next Reviews

© 2022 Copyright Millennium Luxury Coach. Designed and Developed by Next Horizon.